Includes various free helpful online calculators for determining rainfall in your area, amount of rain you could collect from your roof based upon your roof’s size, and a cistern sizing calculator as well.  (Links updated in September 2017).

At eight points along the perimeter of this building, the arched roof directs all rainwater down to leaf-shaped catchments which funnel the water into cisterns made of ferrocement, the interiors of which are lined with ‘Thoroseal’ which is a food grade waterproofing agent. In the photo above, The round cement pad of a thousand gallon cistern has been poured, and rebar stubs protrude through.  On the left, a round, thousand gallon cistern is curing beneath damp burlap, with wooden pallets leaning against the cistern to hold the burlap temporarily in place. Another option which would be less expensive than using ‘thoroseal’ which is available as a special order item through ACE Hardware stores in my area, would be to use ‘Anti-Hydro NC’ as an additive to your cement. It not only makes waterproof, FDA approved food grade cement, but prevents the steel from corroding. The catch is that it has to be special ordered through a supply company over a hundred miles away from me and picked up there, but people who live somewhere near civilization could likely get it more easily.

CALCULATORS: According to the national weather service and world climate records stored elsewhere, my area receives on average, 12-13 inches of rain per year- I found that free information here.  ( http://www.worldclimate.com/  )  Using that information and the square footage of my roof, I was able to determine the total gallons of water that fall in a year by using the free online calculator here.  ( http://www.csgnetwork.com/rwcollectioncalc.html )   Further, one can determine the correct sizing for cisterns here: http://www.harvesth2o.com/tank_capacity.shtml This among other things will show you how many gallons are held in a tank of a given diameter and height (you input those variables on the site. It assumes that cylindrical tanks will be horizontally oriented instead of vertical.) 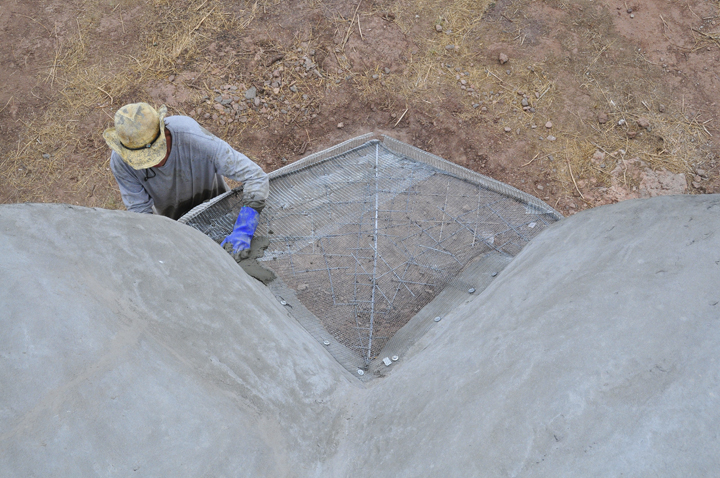 Seen from atop the roof and looking downward, a leaf shaped catchment formed from rebar, stock panel and an enveloping dual layer of expanded metal lath has been formed. A friend applies modified non-shrink construction grout, working it through the layers of lath to trap all the metal components.  This ‘leaf’ will direct flowing rain water from the roof to a cistern which will be situated beneath it. Note: if done again I would order a few tons of sand and buy sacks of portland cement, adding antihydro because that option ends up being way cheaper than purchasing pre-made sacks of construction grout. Also, the grout touted itself as being waterproof, but in practice seems to have no such qualities. 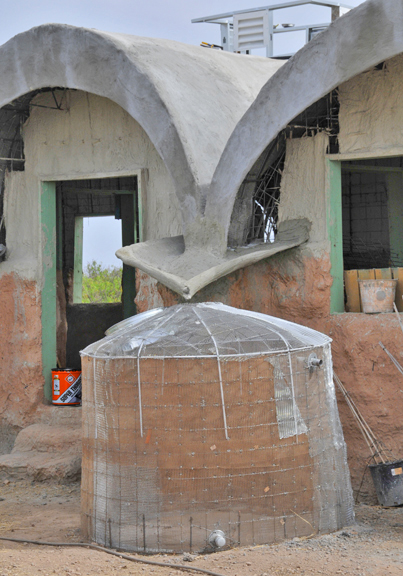 (above) Note the water catchment which directs water flow from the roof towards the center opening of the soon-to-be-cemented cistern.  At this stage the cistern is a rebar and galvanized stock panel skeleton covered with expanded metal lath, which is attached with a hog ring gun.  At the top right of the tank is a 2″ diameter metal pipe as an overflow. At the bottom is another 2″ pipe which pokes through about two inches into, and two inches out of the tank, with a threaded metal cap. This will be used as a clean-out for the tank. Unseen to the left is a 1/2″ pipe with a valve to be used for attaching to a garden hose.

(above) a catchment formed from rebar, stock panel, and covered in expanded metal lath.

(below) This same catchment being ‘mudded’ with modified grout. Not only do the catchments collect rain water, they protect the corner butresses from direct rainfall.

Many folks use 55 gallon drums as rain collection barrels, but I would need 18 of those at each downspout to replace a 1,000 gallon cistern. I could have directed the water to a single, larger cistern instead of 8 smaller, 1,000 gallon cisterns, but I like redundant systems because they have less chance to fail. If one breaks or springs a leak, or needs to be cleaned, I’ve still got plenty of water storage. Plus, a smaller tank needs less strength to contain the water, and I’m just getting started with ferrocement cistern design.

Cost: as of September 2009, all materials to build a 1,000 gallon tank had cost me almost exactly $300, which is thirty cents per gallon of storage. Steel or plastic cisterns generally cost a dollar per gallon of storage, and used ones are usually fifty cents per gallon. On the round house, I thought of using an inexpensive above ground swimming pool- one that holds twelve thousand gallons only costs a few hundred dollars. I’m planning on building a greenhouse and thought that if the swimming pool were in the greenhouse, it would keep the plants from freezing during our winter nights (although its the desert, we’re almost a mile high and we get single digit temperatures). Also, a greenhouse roof would provide more opportunity for water collection. I priced pond lining material with a twenty year guarantee, and its cheaper than the above ground pool option. I could build an above ground perimeter basin either from sandbags or hire someone with a backhoe to place a continuos circular or oval berm which would be the rim of the pool. A recirculating pump or water feature would keep the pool from becoming stagnant. 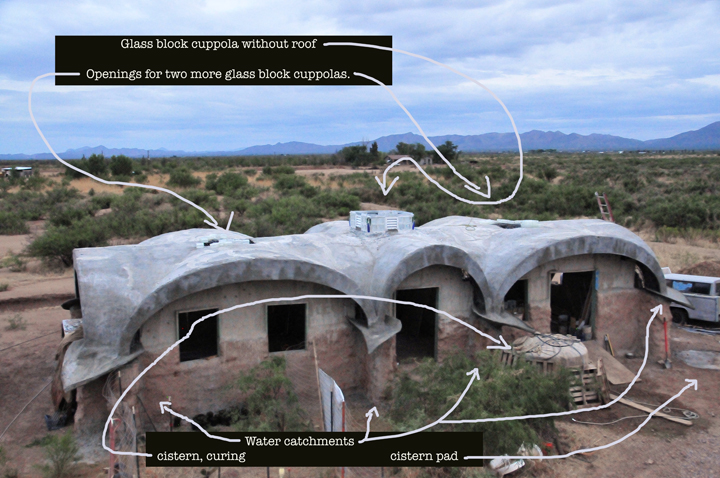 (Above) The most confusing photo/diagram in the world ! 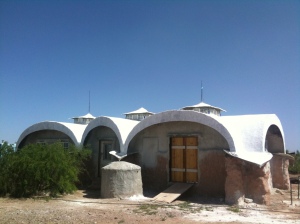 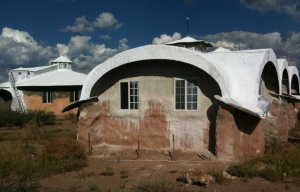 Limewash coating on roofs. This didn’t hold up so well, so after it had weathered considerably, the roofs were coated with elastomeric paint which so far (as of September 2017) has remained water tight and adhered well.