After the earthbag walls were erected and coated with an adobe/paper/lime render, it was time to get underway with the roof. First I made a scale model of the building and the proposed arching trusses which were fabricated from 5/8″ rebar. The model shows 2D trusses but for stability the actual trusses were three dimensional as shown in the photos that follow. The design is actually a series of intersecting vaults. 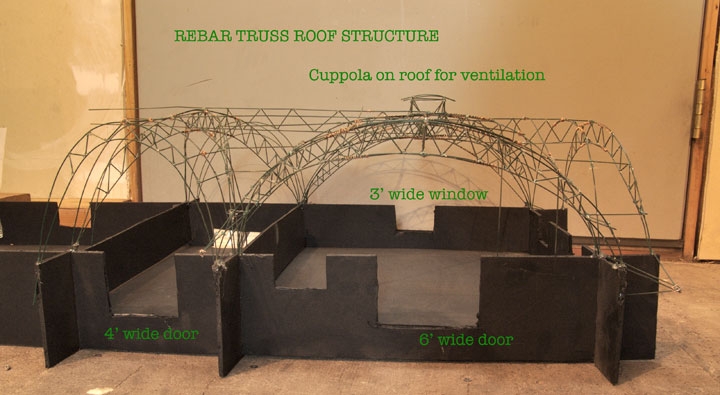 A note about the image above: burlap didn’t end up being the roof coating. Instead we used expanded metal lath over stock panels and wired on using bailing wire. That was coated with a 3/4″ embedded layer of non-shrink construction grout modified with chopped pva fibers. (pva = poly vinyl acetate). In retrospect, using sand and portland cement would have been much less expensive, as the sand can be ordered for about thirty dollars a ton and a 94 pound sack of portland cement costs roughly ten dollars here in 2017.

Here, the “X” trusses have been placed. Note the pins of rebar extending upward from the walls- these are welded to a steel ‘top plate’ which is concealed in the final layer of render and runs along the tops of the walls. The pins extend about four feet into the walls, and the rebar trusses, etc. were welded to these. 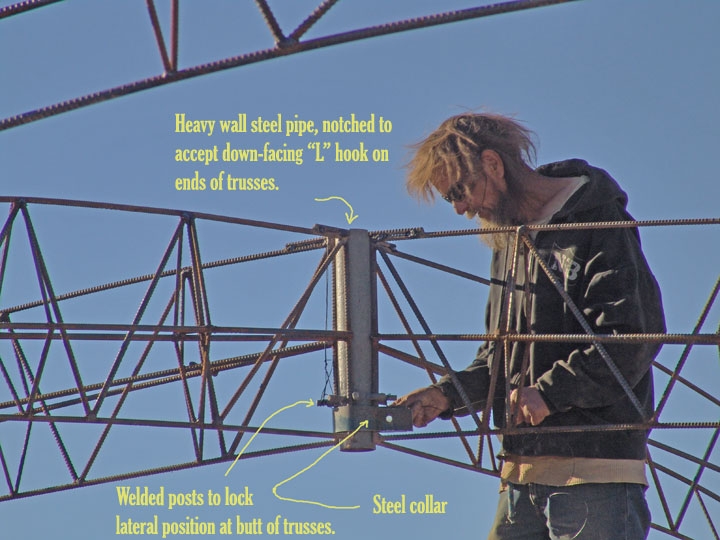 Each X section is comprised of four ‘legs’ which join in the middle at the pipe, shown above.

Above, a truss is laid out and welded together on a plywood table treated with borax to prevent it from burning. It smoldered but never caught fire. 37 truss sections were welded upon this table, each about the size of this one. 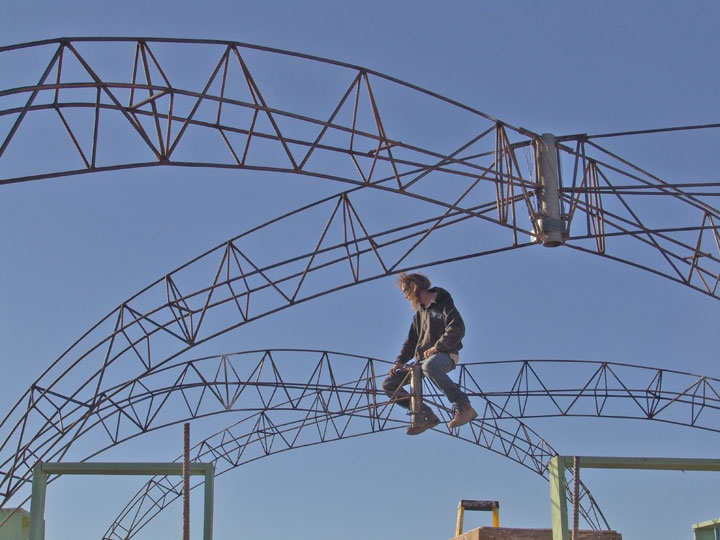 With zero noted deflection even with this minimal amount of truss work in place, we pressed ahead confident that the engineering was sound. The gentleman seated above is a close friend and provided the final design, engineering (complete with animated 3D stress loading), and both off and on-site fabrication almost for free- he’d had a series of strokes and only had the full use of one hand and wanted to find out if he was still capable of such a project

Here the sections of truss were being welded to the heavy guage pipe. 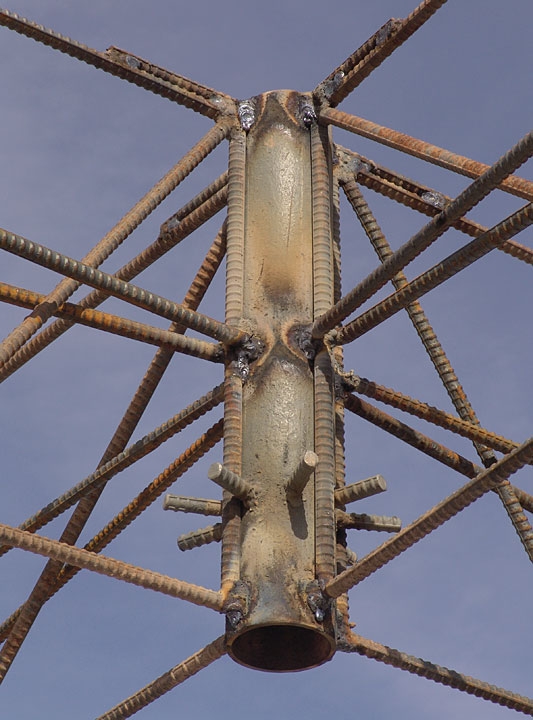 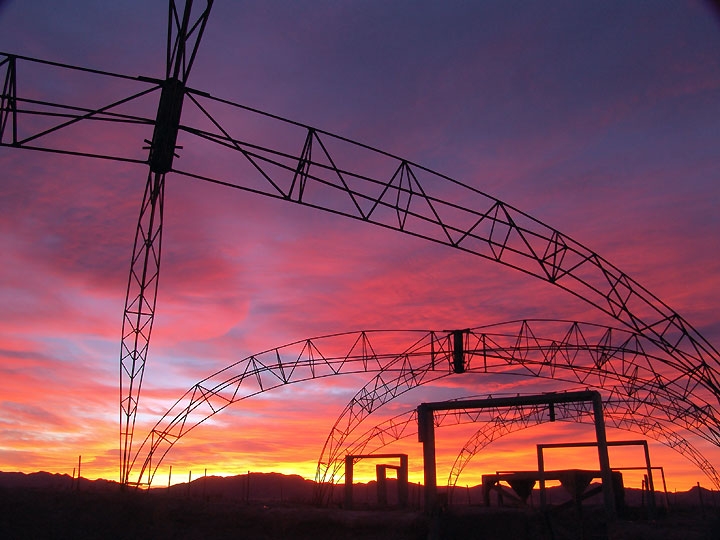 Sunsets in Arizona can be spectacular.

Above, all trusses in place and welded. After this, rebar purlins were welded every two feet in order to define the shape, and stock panels were laid and attached to that.

Above: stock panels being attached to rebar purlins and trusses. Note area near my friend who is standing upright- large open spaces are evident here because stock panels have not yet been placed in this area

Above: View looking down from atop the roof structure. Silver/gray metal is stock panel. Only sturdy enough to walk upon the rebar areas without deflection at this stage. 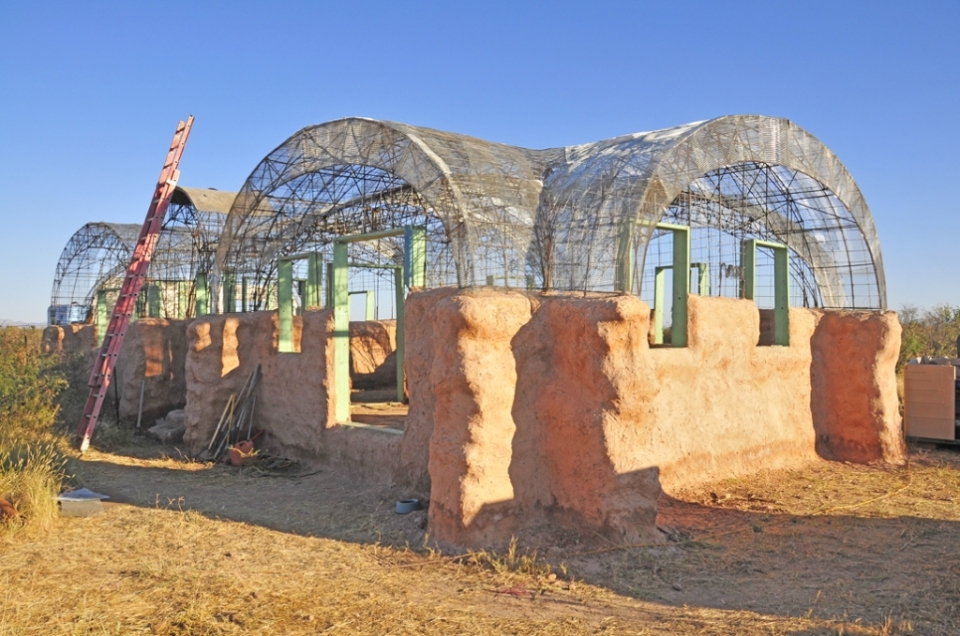 Above: expanded metal lath has been attached to entire roof surface.

Wire lath placed and attached to stock panels. Open square at center is where cuppola will be placed.

The material I have begun applying to the roof structure is high strength, non corrosive, non shrinking grout modified with 3 ounces of chopped PVA (poly vinyl acetate) fiber per 50 pound bag (dry weight). The reason I’ve gone with this option is that I can afford to purchase the grout piece meal, and have found that when wetted down, cold joints blend well without cracking. On a small test structure I found I could use this material in much thinner application than traditional ferrocement, and can control the stiffness of the mix to allow placement on the steepest sections of the roof without it sloughing off- at the base of some of the arches the angle approaches 90 degrees. It is hoisted in five gallon buckets to the roof through the openings for the cupolas using an electric winch, and the material is poured out upon the mesh and worked with a gloved hand. 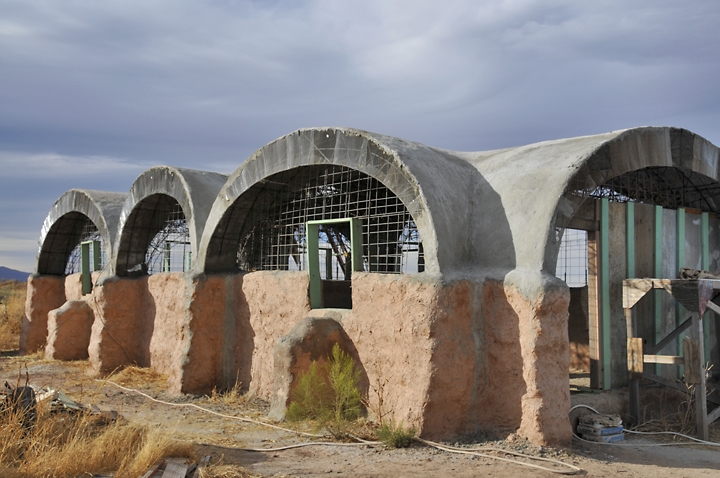 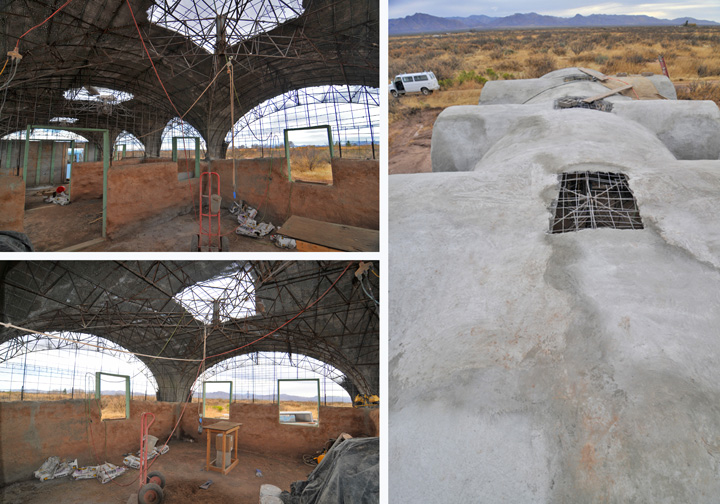 Above left are the domes from inside.  Above right: Roof coated except for cuppolas. 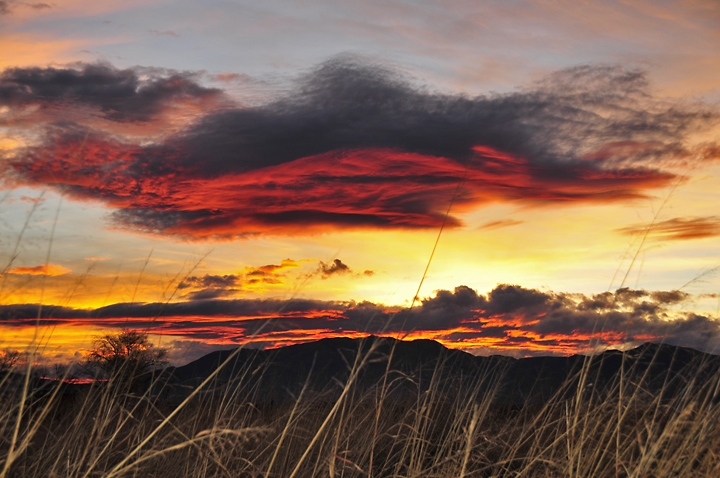 December sunset from the property. 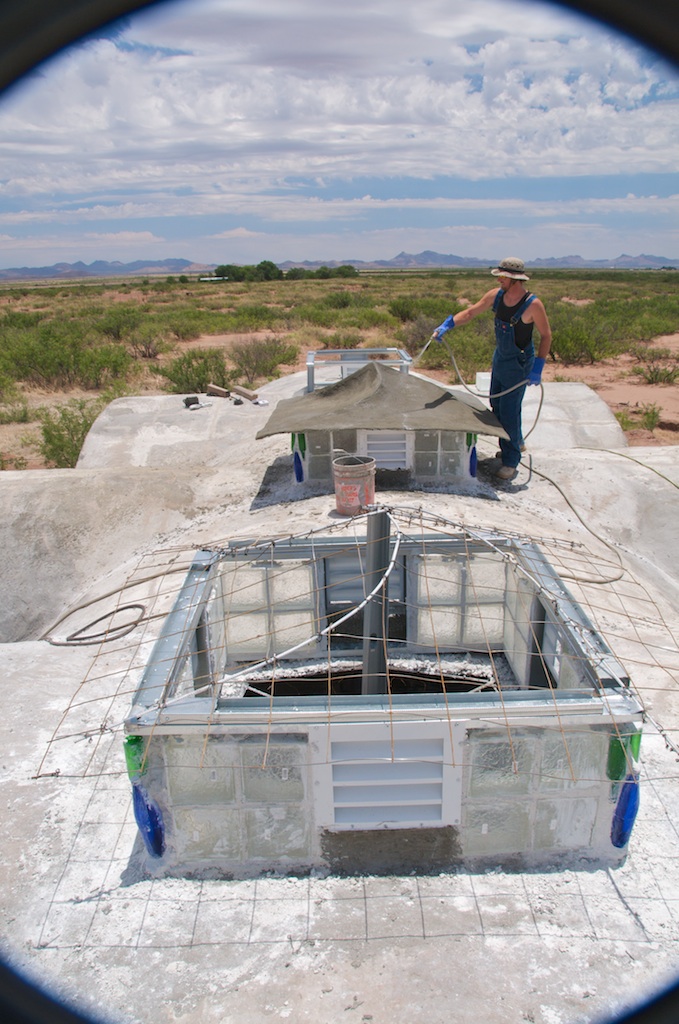 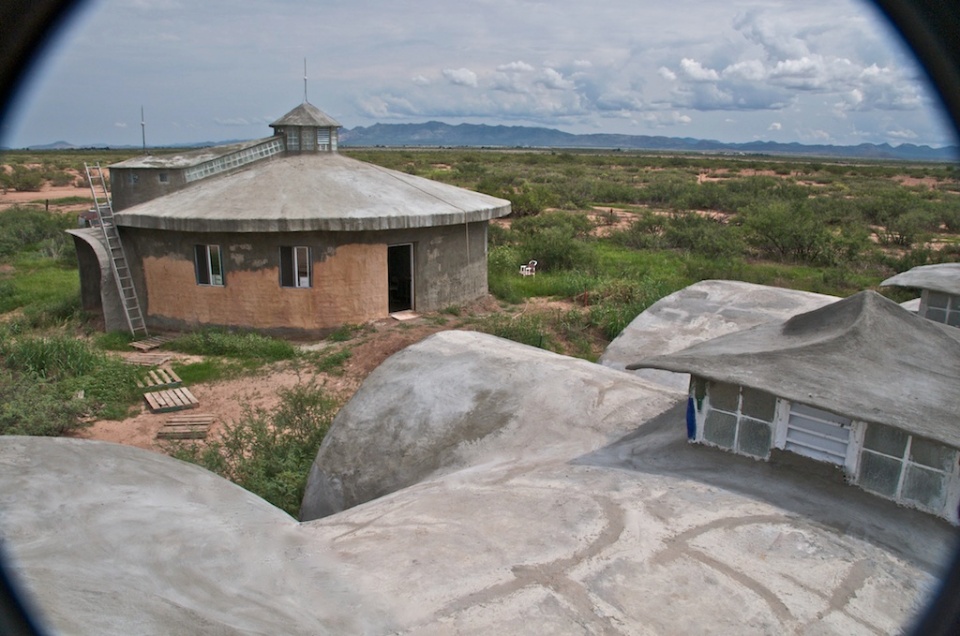 Above: the structure circa 2012 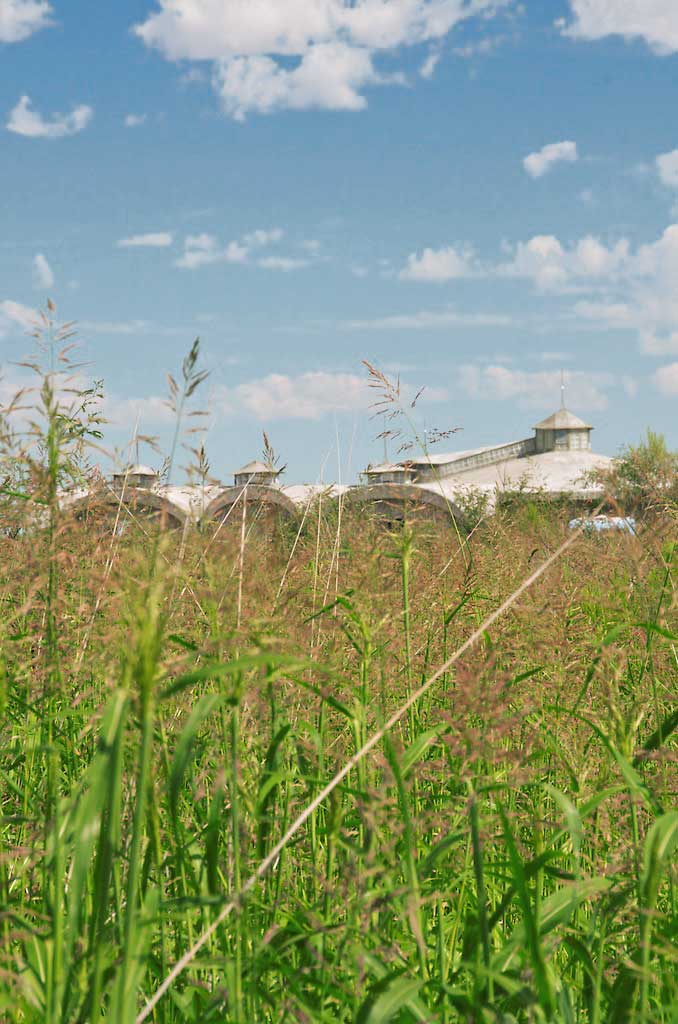 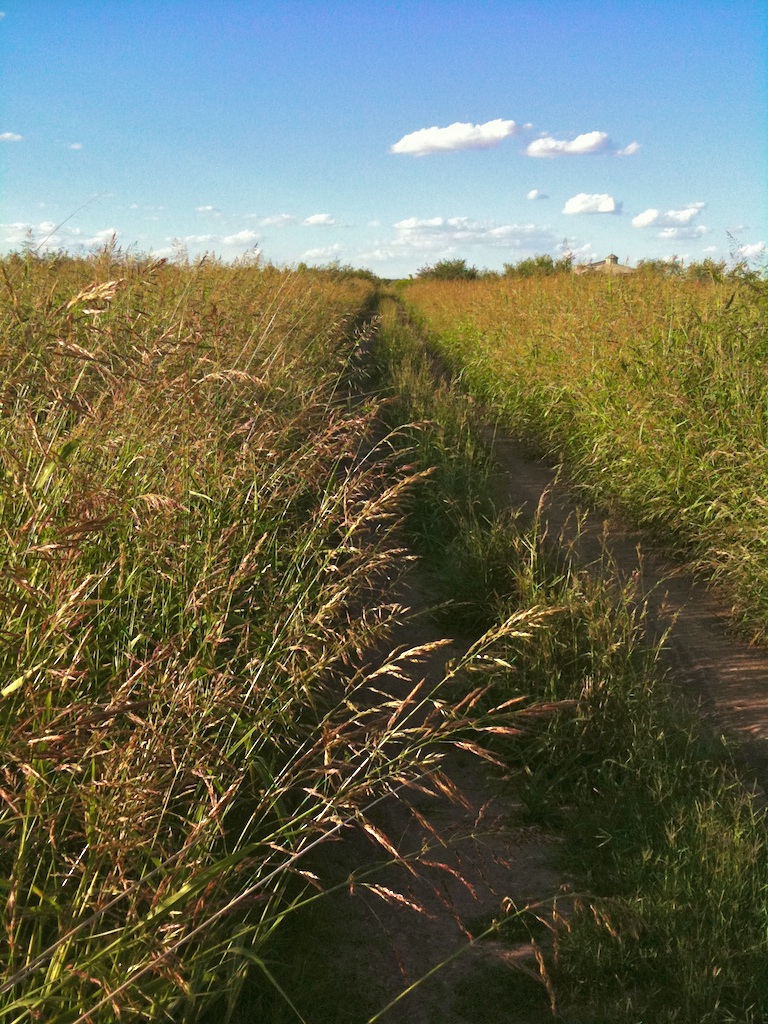 The grass grows too well here.

Even with daily driving, the space on the road between tire ruts is filled with grass between three and four feet high. Some of the grass to the sides is seven feet high- its all the nitrogen that falls to the ground during lightning intense storms that we get in the summer. It makes for excellent fertilizing of plant life.

If you want an easy address to remember this site by, type this to see it. No, really… TypeThisToSeeIt.com